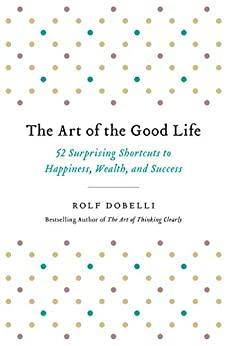 The Good life is a very light book about few mental models and heuristic to live a good life. In a sentence, its a mixture of Stoicism and cognitive Psychology.

Once you hit thirty, life’s too short for bad books.

2. The Fine Art of Correction

The more complicated the world becomes, the less important your starting point is

The key is to discover why it happened and tackle the issue at its root.

6. The Negative Art of the Good Life

14. The Circle of Competence

15. The Secret of Persistence

16. The Tyranny of a Calling

17. The Prison of a Good Reputation

19. The Smaller Meaning of Life

24. The Spiral of Self-Pity

26. The Circle of Dignity—Part I

27. The Circle of Dignity—Part II

28. The Circle of Dignity—Part III

39. The Point of Maximum Deliberation

41. The Illusion of Changing the World—Part I

42. The Illusion of Changing the World—Part II

51. In Praise of Modesty